THE HISTORY OF THE MANSION

Maison Soulé & The Paris Room is situated in the Soulé House Mansion, named after its original owner Pierre Soulé, an émigré Frenchmen who settled in New Orleans. Soulé’s 184-year-old mansion possesses both history and mystery within its stuccoed walls.

With twenty-two rooms of 17-foot ceilings, three balconies, a kitchen house and garden, Maison Soulé has transformed itself during two centuries from an elegant manor to an orphan asylum, from jazz parlor to contemporary bistro.

The stucco-covered red brick façade of Maison Soulé is a fine example of a transitional style three-story house circa 1833, designed by Guirlie and Guillot for Pierre Soulé who acquired the property from Samuel Hermann & Company.

Built on St. Louis between Royal and Bourbon streets, the brick house was considered one of the coolest and most comfortable houses in the city of New Orleans, the property having been improved and fitted up in the most elegant manner by its former owners without regard to expense.

The original dwelling contained two large parlors, a spacious hall frescoed by Canova, a frescoed library, large dining room, five bedrooms and a dressing room beside one office in the main building plus the balcony overlooking the street paved with square blocks. The back building contained a kitchen, store room, washing and ironing rooms on the ground floor and servants’ rooms with bath and pantry on the upper floors. The flagstone yard led into a rear garden which remains to this day.

Known as a U.S. politician and diplomat, Pierre Soulé came from a notable background. His father was a brilliant officer under Napoleon, and Pierre took a strong interest in politics and law from an early age. Publishing several articles that opposed King Charles X, Soulé’s revolutionary activities and opposition to the government landed him in prison by order of the king in 1825. Escaping his imprisonment, Soulé fled to Great Britain before journeying to New Orleans in 1828.

As construction on the mansion began in 1829, Soulé married Armentine Mercier, a belle of the French Quarter. Over the years, Pierre Soulé became a criminal lawyer, exceptional orator, financier and a man of affairs. A generous friend of French refugees, Soulé rose in social circles and was elected the U.S. Senator for Louisiana, serving from 1849 until 1853 when he resigned to accept appointment as U.S. Minister to Spain, a post he held until 1855.

In 1854, Pierre Soulé became the driving force behind the infamous Ostend Manifesto, a secret document written by American diplomats including Soulé, James Mason, and James Buchanan. The manifesto outlined a plan for the United States Government to acquire the island of Cuba from Spain. In this antebellum era, Cuba still had legal slavery, and many American expansionists believed America had the “right” to Cuba due to its proximity to U.S. soil.

When word of the manifesto leaked, it created a great controversy in the northern states, and Soulé proved extremely antagonistic, despite his efforts to abolish compulsory capital punishment. Northern politicians expressed outrage and decried the manifesto as an attempt to extend slavery, and the three diplomats became known as advocates of forced labor. The Ostend Manifesto strained relations between politicians in the North and the South, and the nation took one step closer to Civil War.

Therefore, in 1862, Federal Troops arrested Soulé as a confederate sympathizer and commandeered the mansion. Pierre Soulé was charged with “plotting treason against the United States government,” and imprisoned. After his release, Soulé went into exile in Havana. However, Pierre Soulé was pardoned by President Andrew Johnson on November 1, 1865.

Years later, he returned to New Orleans, and in 1870 he died in his bedroom on the third floor of the mansion. Soulé is buried at the end of the street in St. Louis Cemetery No. 2.

Upon Soulé’s arrest, Federal Troops temporarily transformed the mansion into an orphanage shortly after the end of the Civil War. Born free in the North, Louise De Mortie was an African-American lecturer and popular singer who moved to New Orleans to help raise funds, aid children, and serve as manager of the Soulé Mansion Orphanage. De Mortie became described as the “Matron” of the Orphanage.

As the home of Pierre Soulé became the first domicile for the orphans of gens de couleur, Louise De Mortie became one of the most well-known African-American female speakers. Praised for being magnetic and personally attractive, De Mortie managed the home for African-American children left orphaned by the Civil War. Using her fame, De Mortie devoted herself to extensive fundraising, holding a two-week-long fair in 1865 which netted $1,083.75 for the orphanage.

Years after the orphan asylum closed, the Soulé Mansion changed ownership many times. Between World Wars, Mary Lee Kelley ran the original “Kelsto Club” in the space.In 1966, legendary trumpeter and bandleader Al Hirt opened “Sinatraville” at 720 St. Louis Street. Sinatraville was a late-night drinkery, operating from 9 p.m. to 8 a.m., seven nights a week, with no other entertainment than Frank Sinatra tapes and records.

Notable occupants of the mansion include Jim Garrison, the John F. Kennedy assassination investigator who lived on the third floor from 1967 to 1969. Verita Thompson, actress-turned-hairdresser best known for her 14-year reputed affair with actor Humphrey Bogart, ran a bar called “Bogy and Me” in the French structure during the 1980’s.

From 2002 to 2008, former mistress to President Bill Clinton, Gennifer Flowers, owned the Soulé Mansion, opening a piano bar called “The Kelsto Club” in homage to the former jazz parlor.

Numerous individuals have passed away in the Soulé Mansion over the years. Many believe the second floor servants’ quarters and main bedroom to be haunted by the spirits of small children running amok.

As a prime piece of real estate, only a bead toss from Bourbon Street and directly across from Antoine’s, Maison Soulé has a history as ornate as the scrolled wrought-iron balconies lining its masonry. Centered in the 300-year-old metropolis of New Orleans, the mansion at 720 Rue de Saint Louis now hosts locals and visitors in a restored French-inspired decorum serving dishes from the South of France by way of Louisiana.

The History of the Maison Soulé 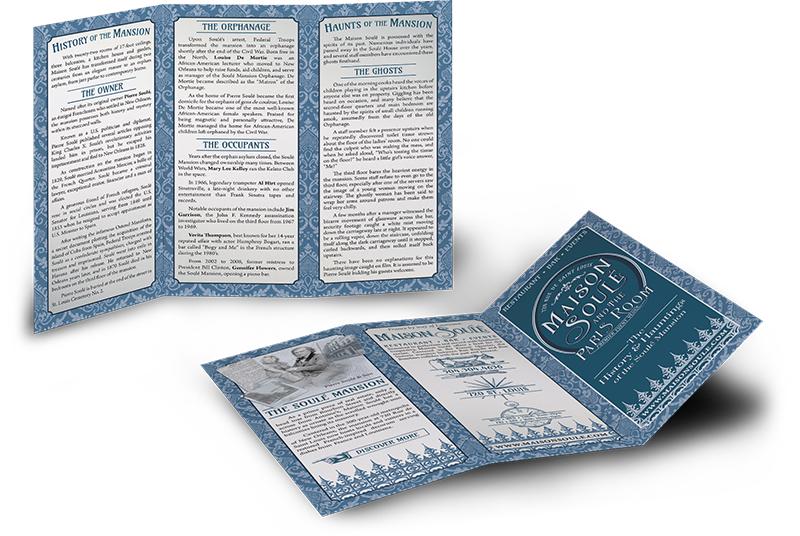